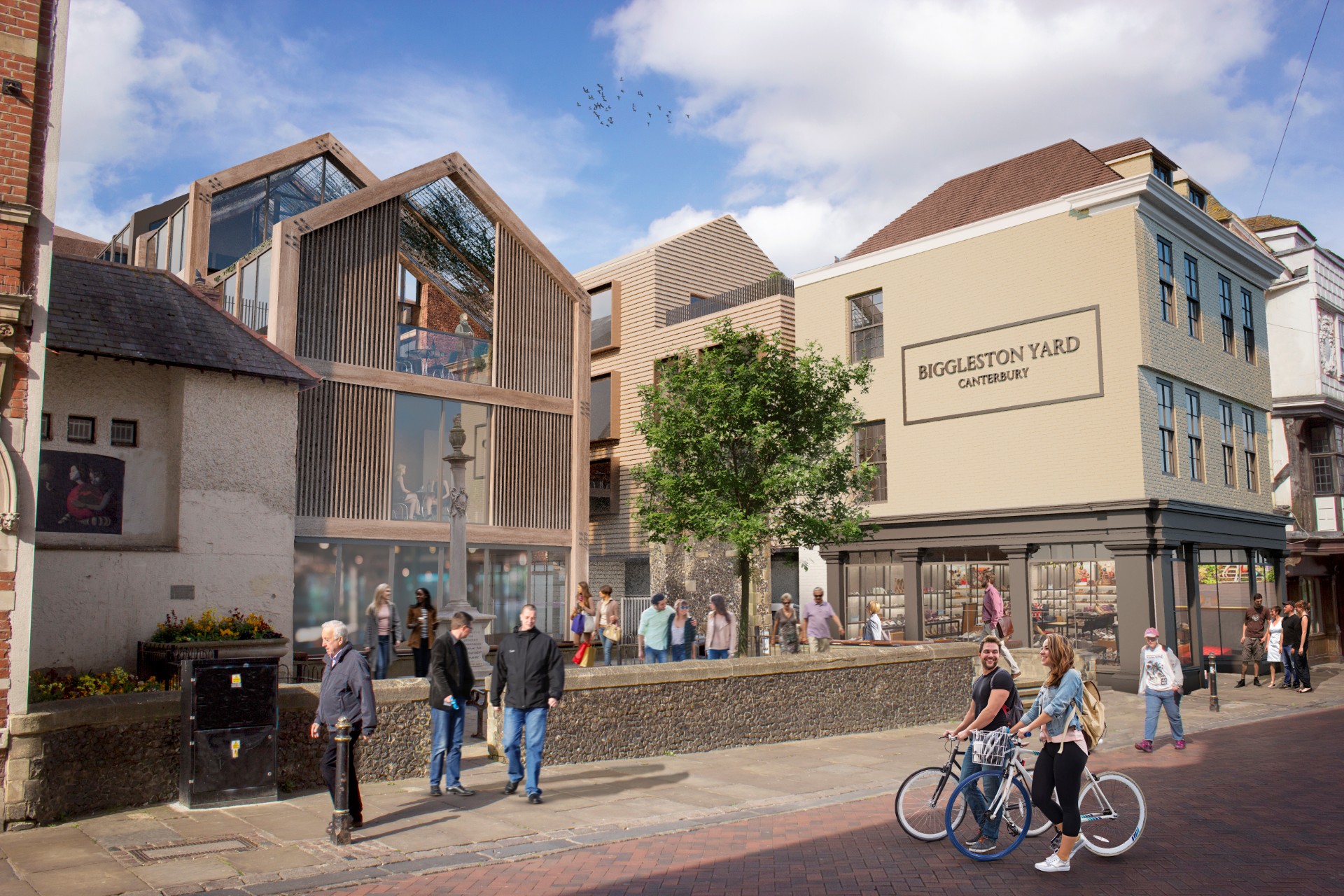 Confidence in Canterbury’s future has seen plans submitted for the multi-million pound redevelopment of an important city centre site, including the former Nasons Department Store.

Biggleston Yard, named after the historic family-based business that once operated on the site, is the new retail, commercial and housing-led regeneration scheme proposed by Setha Group, the London-based property development company.

The £30m investment proposals submitted to Canterbury City Council include a covered retail arcade and market hall, as well as restaurants linked to new public squares and open space accessed from the High Street. The new buildings would incorporate the listed building at 46 High Street, and other heritage buildings including Foresters Hall.

In addition to the new retail area, Biggleston Yard includes plans for office space, alongside 32 serviced apartments, a further 33 residential units and community uses on the 0.38 hectare site which has been vacant since September 2018.

The Biggleston Yard planning application follows the very positive reaction to the proposals when they were presented during a two-day public exhibition at the end of last year.

Manuel Alsoni, Chief Executive Officer, Setha Group, said: “Biggleston Yard is a sustainable response to the changes happening in our city centres. Canterbury can celebrate its medieval past, and at the same time provide an exciting future for residents, visitors and businesses.

“By combining the site’s industrial past with high-quality sustainable development it offers an exciting new chapter for Canterbury.”

The mid-19th century foundry used by HM Biggleston & Sons, a six-generation family business that produced iron castings, railway girders, lamp-posts and other street furniture, would be retained and refurbished, and the forge repurposed and integrated within the scheme.

The late 19th century buildings, such as Foresters Hall, would also be retained and the churchyard of the former St Margaret’s Church incorporated to create an accessible open public space.

Karl Elliot, Managing Partner at Canterbury-based Clague Architects, said: “Biggleston Yard would be a new retail destination and place to live and stay in the heart of Canterbury.

“Having a site the size of Nasons vacant leaves an economically important hole in the centre of the city. Canterbury remains a positive place to invest and we hope the plans are welcomed as we look to restart the city centre’s economy.”

“By masterplanning the site as a whole we have been able to create a T-shaped pedestrian area connecting the High Street through a covered commercial arcade and linked to White Horse Lane and St Margaret’s Street.

“This will enhance the visitor experience and reinvigorate the heart of Canterbury.”

The Biggleston Yard proposals were the subject of a two-day public exhibition in December 2019. Of the 365 attendees the feedback left by the public showed overwhelming support for the project with more than 91 per cent in favour of the development, 74 per cent very supportive and 17 per cent quite supportive, with a further five per cent describing themselves as undecided or neutral.

It is hoped the Biggleston Yard proposals will be considered by Canterbury City Council before the end of the year. If approved, work is expected to get under way during 2021.